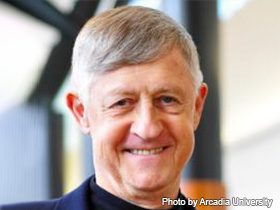 A professor at Arcadia University, Richard Wertime set his first novel, Citadel on the Mountain, in McConnellsburg.

Richard Wertime, a writer in many genres, was born in Baltimore in 1942. After an intense childhood with his CIA-trained father, Wertime was educated at Haverford and the University of Pennsylvania. He has published several short stories, was contributing editor of Archaeology magazine, and wrote his acclaimed memoir, Citadel on the Mountain (2000), set partly in McConnellsburg. At the time of this writing, he is a full professor of English and Writing at Arcadia University in Glenside, Pennsylvania.

Richard Allen Wertime was born in Baltimore, Maryland, on June 4, 1942. He is the son of Bernice Olivia Wertime and Thomas Allen Wertime, a CIA-trained, Foreign Service officer. Wertime would record his tumultuous youth and relationship with his father in later years, writing an acclaimed memoir of the time. He matriculated at Haverford College, graduating in 1964. During his course of study, he met and married Jane Siple. The couple would divorce in 1967 while Wertime was pursuing his doctorateat the University of Pennsylvania. He married Marcia Satterthwaite in 1971. They divorced in 1996. Wertime has four children: Michele, Kent, David, and Geoffrey.

Richard Wertime's involvement with writing has been deep and varied. Encouraged in high school by friend and future novelist Max Byrd, Wertime began to write poems and stories for the school's literary magazine. This kindled a love of literature strong enough to drive Wertime to earn a doctorate in the subject. He began his professional career at Beaver College (now Arcadia University) in 1975 and commenced writing professional articles on subjects as widely divergent as psychology, medieval literature, Shakespeare, and Italian culture. Moreover, he served as Contributing Editor of Archaeology for 23 years, writing several articles and editing many others. He has also published a number of short stories and poems.

Wertime's greatest success came with the publication of his 2000 memoir, Citadel on the Mountain. The memoir is largely concerned with Wertime's fraught relationship with his father Theodore. The elder Wertime had been trained by the CIA in many skills, anger management not among them. The younger Wertime recalls, for example, his father telling his mother to tell the children not to resist beating as they made him angrier. Eventually, Theodore Wertime would construct a great cement bunker/house atop a mountain in McConnellsburg, Fulton County to have a point of safety from which to lead the social revolution he believed was needed and was near. At once cathartic and melancholy, Wertime's Citadel on the Mountain received generally favorable reviews in 2000. The New York Times' reviewer, Richard Rhodes, wrote that the memoir was "utterly compelling" and a "powerful memoir" that sets "a high standard." The Michener Center for Writers awarded the James A. Michener Memorial Prize to the novel. The Michener Memorial Prize is sponsored by Random House and honors the best first book by an author over the age of 40.

Wertime's philosophy about creative writing is both elegant and erudite:

I take as one of my central touchstones as a writer a remarkable—and elegantly simple—sentence of Kenneth Clark's, from his book, "Landscape into Art." In commencing a discussion about the landscape painter's passion for visible light, Clark says, "Facts become art through love." Those five words alone seem to me to condense an immense amount of wisdom, and remind us that every artist must approach his/her task with an inherent generosity of mind that ennobles the project at hand, irrespective of the artistic medium. Indeed, even when a writer is disparaging or "assassinating" a character—as writers like Willa Cather and Eudora Welty do so deliciously—there must be a kind of love of one's subject at work, a profound and attentive, and hence an inherently respectful, care for the character. Great art, to my mind, is always generous in nature, never mean-spirited, and always deeply serious—even the comic masterpieces.

At the time of this writing, Wertime continues teaching English and Creative Writing at Arcadia University, as well as conducting writing workshops in the suburban Philadelphia area.