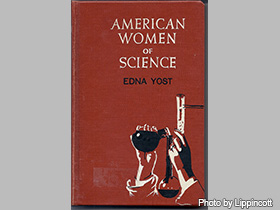 Edna Yost, author of American Women of Science (1943), was born in Clearfield County.

Biographer and science writer Edna Yost was born in Clearfield County in 1889. After attending Allegheny College and teaching high school, she moved to New York and took up editing and freelance writing. She is best known for the numerous volumes of biographical sketches of scientific figures. Yost passed away in 1971.

Edna Yost was born on November 16, 1889, in Clearfield County, Pennsylvania, and became a native of Houtzdale. She was the daughter of Lewis and Laura Yost. She matriculated at Allegheny College, earning her bachelors degree in 1913. Yost immediately began a career as an educator, taking a mathematics and English position at Johnstown High School from 1913 to 1916. At the end of that period, she moved to New York City, which would be her home for the rest of her life.

While in New York, Yost became an editor for the American Public Health Association and then for the American Society of Mechanical Engineers. She would also contribute short stories, articles, and poetry to over 40 magazines. Yost also wrote small scale biographies for the Dictionary of American Biography as well as to several encyclopedias. This work would presage much of her professional publication.

Yost published her first set of biographical works in 1941 in a volume entitled Modern Americans in Science and Invention. It was aimed primarily at a younger audience. In 1943, Yost published the second of biography collections, American Women of Science. It contained sketches of 12 different women involved with science. Renowned journalist Ida Tarbell reviewed the book for the New York Times, saying that "Women who would know the best and highest of these achievements of their sex in science and the routes they took to them cannot do better than read this honest, direct and always interesting piece of work."

In the latter days of World War II, Yost teamed with scientist Lillian M. Gilbreth to write works aimed towards helping permanently wounded veterans. In 1944, they published Normal Lives for the Disabled, in which their "one great aim...is to help a disabled man (civilian or service man) avoid being numbered among those who receive less than their fair due if more is needed to make him economically independent." Richard Match described the book as "written with sympathetic realism and unerring tact" ideally suited for the newly disabled. The two would go on to write a pamphlet for the Public Affairs Committee entitled Straight Talk for Disabled Veterans (1945), a slender volume of advice for those disabled in the war.

Frank and Lillian Gilbreth were the subjects of her next biography, Frank and Lillian Gilbreth: Partners for Life (1949). This was the pioneering couple who researched the work habits of industrial workers and conducted motion studies. Their lives had earlier been written by two of their many children and was called Cheaper by the Dozen. Subsequent film versions in 1950 and 2003 have had little to do with the Gilbreths. Yost's biography was praised by James MacBride in the New York Times as a "sober-sided biography" that "belongs in the library of every industrial engineer." The Gilbreth Network, an organization dedicated to furthering the work of the Gilbreths, maintained that Yost's biography helped to give "America a balanced knowledge of the Gilbreths."

In 1964, Yost published Women of Modern Science, another in her sequence of biographical collections. Library Journal reviewed the book quite positively: "The book is a positive contribution to the current pleas for more scientific and technical training, since it describes how some women scientists chose their life work and what they have been able to accomplish. The style of presentation is simple and direct; each sketch is a skillful combination of biographical facts and scientific achievement."