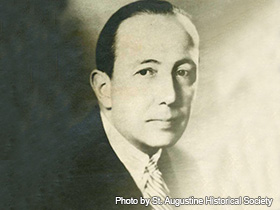 As the older brother of Stephen Vincent Benèt and the third husband of Elinor Wylie, Benèt's literary reputation was somewhat overshadowed by his private life. He founded The Saturday Review of Literature in 1924 and edited it until his death. In 1942, he won the Pulitzer Prize for Poetry for The Dust Which is God (1941). He was also the first editor of the Reader's Encyclopedia (1948) that now bears his name.

William Rose Benèt grew up in Bethlehem. He was a Pulitzer Prize-winning poet and editor who left behind much writing and numerous editing projects. He is best known for founding and writing columns for The Saturday Review of Literature, one of the leading voices in the literary world for years. He also was a poet, winning the 1942 Pulitzer Prize. Benèt died in 1950.

William Rose Benèt was born on February 2, 1886, in Brooklyn, New York, but was raised in the Pennsylvania city of Bethlehem. He was educated at Yale University and graduated in 1907. His siblings, Stephen Vincent and Laura, were also writers.

William was very diverse in his literary talents. He founded the Saturday Review of Literature with Henry Seidel Canby, Amy Loveman, and others in 1924. Benèt edited entries and wrote in columns for the paper for many years. The Saturday Review was a leading publication on literature until the magazine ceased operations in 1982.

Benèt created his own encyclopedia in 1948. The Reader's Encyclopedia is a collection of information that Benèt believed would be most important for writers and readers of all ages. In its introduction, he explains, "Likewise it will prove a real aid to the vocabulary and allusiveness of writers, as well as providing them with a genuine source book of ideas." Benèt organized his encyclopedia in a manner in which most English-speaking people can most easily understand. For example, authors and titles appear under the names for which they are most known, and translations are provided for foreign language text. Four editions of The Reader's Encyclopedia have been published. Bruce Murphy, the editor of the most recent edition, preserved the style and format Benèt originally used.

William Rose Benèt had critiques and columns in several reviews. He is also the creator of numerous collections of poetry, a novel, a volume of essays, and an anthology. Benèt completed various editing projects, including the poetry of his second wife, Elinor Wylie. His autobiographical verse-narrative, The Dust Which is God, won a Pulitzer Prize in 1942.

William Rose Benèt died on May 4, 1950, in New York City. His passion for literature and writing was reflected in his lifetime devotion to it and in the contributions he made.