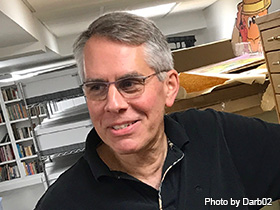 Michael Berenstain was born December 21, 1951, to Jan and Stan Berenstain, authors of the famous Berenstain Bears children's books. He grew up watching them write and draw in their studio in Philadelphia, Pennsylvania. His parents were magazine cartoonists before they were children's authors, and their family life was the main topic for the cartoons. When Michael Berenstain discusses being the topic of cartoons, he says, "it was something I lived with since birth and I thought that was just the normal way to be. If you did something, or something happened in the family, or something funny happened, it would show up published somewhere. That seemed normal to me. I never gave it a thought." Berenstain became inspired in his parents' studio. "They were always doing things, creative things, for me and my brother...It was like the creative family factory, and they were the leaders," says Berenstain of his parents. Following in their footsteps, he attended Philadelphia College of Art from 1969-1973. Berenstain continued his education at Pennsylvania Academy of Fine Arts from 1973-1974.

As Michael Berenstain began his professional career, he worked as a designer in the Children's Book Department of a publishing company. He also began writing and illustrating several children's books. His early works, such as The Creature Catalog (1982)and The Troll Book (1979), focused on supernatural topics. Some of his later books, including the Dwark series and the Panda series, included main characters that were smaller and softer. In the mid-1980's Berenstain began to work closely with his parents. Their Berenstain Bears series had recently been debuted on television, and Michael Berenstain decided to help his parents with all the extra work. He says, "the popularity of the books was such that they finally got to the point where they couldn't do it all, so they would sometimes say, here, can you help us with this? Can you help us meet this deadline? And I'd say sure. I was happy to do it."

When discussing working with his parents, Berenstain states that, "in the 80's [it] gradually took over my life," and a decade later, he was working full time with his parents at their studio. His father died in 2005, and Michael Berenstain continued to work at his mother's side. Continuing to work on the Berenstain Bears series after his father's death was not a decision for him. He was working so hard, and there was so much to do that "it was just full-steam ahead." He jokes about the amount of work he and his mother had, "It was like the I Love Lucy scene with the chocolate factory. It's coming down the production line...work and work and work."

Mr. Berenstain worked on a series of faith-based children's books with his mother. The series was known as the Living Lights series. He commentedon writing about this topic saying, "my parents and I have always been aware that we've had a huge amount of enthusiasm from religious families, people of all religions, but especially from Christian families, so the idea of doing books specifically about faith issues has been in the back of our minds." The series was published by Zonderkidz, a division of the HarperCollins Company. Alicia May, Vice President of Marketing saidthat the company "is thrilled to receive constant positive feedback from families and retailers about these new Berenstain Bears books. We are proud to partner with Michael Berenstain on these new books that are inspiring young readers and teaching them in such a fun, familiar way that they are very special children of God."

The Berenstain Bears' Christmas Tree(1980) is one of the books included in this series. It is a "rewriting and new edition of an old book" according to Michael Berenstain. It is the book version of a television program that debuted in 1979. Another title in the Living Lights series is The Berenstain Bears Go to Sunday School (2008). The book details various aspects of the Sunday service and Sunday school class. Kirkus Reviews states, "Fans of the series will feel right at home with the familiar story structure and cheery illustrations, which retain the same style as the many, many other earlier offerings about the family."

The Berenstain Bears' world isalive in an exhibit at the Strong National Museum of Play in Rochester, New York. "Every tree and stump, every clump of grass and hollow log, every barn, chicken coop and shop gives children the opportunity to get involved and be active," says Michael Berenstain. Children are able to explore various settings of the Berenstain Bears series.

At the time of this writing, Mr. Berenstain is continuing his work creating the Living Lights series of religious and spiritual children's books. He states that "doing the Berenstain Bears has become so interesting and absorbing" and that he does not have time for independent projects. He and his wife, Andrea, live in Bucks County, Pennsylvania.When he is able to, he enjoys promoting his work. He says that "what I really like to do is go out and meet kids...they're so funny!"