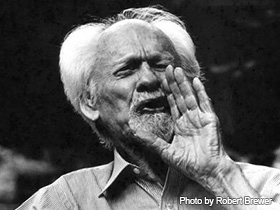 Literary critic and theorist Kenneth Burke was born in Pittsburgh. Most of his papers are owned by Penn State University.

Kenneth Burke was born in Pittsburgh, Pennsylvania, on May 5, 1897. As one of the founders of the New Criticism literary movement, Burke produced a body of work that has left a mark on many American-born writers, critics, and literary theorists. He explored problems of interpretation, literary meaning, and symbolic action in terms of their relationship to human motivations. In 1981, Burke was awarded the National Medal for Literature. Burke died in 1993 in Andover, New Jersey.

In high school, Burke discovered an interest in language and literature, specifically European and modern literature. While at Peabody, he explored different literary mediums by writing short stories and plays. After graduation, Burke went to Ohio State University to pursue courses in French, German, Greek, and Latin.

In 1916, after his parents decided to move to Weehawken, New Jersey, Burke dropped out of Ohio State and moved in with them in order to be closer to New York City. One year after the move, Burke decided to enroll in Columbia University to study philosophy and the classics. However, the structure of the curriculum and constrained learning environment caused Burke to withdraw from the university environment once again in the winter of 1918. In 1919, Burke married Lillian Mary Batterham, and they began a family that ultimately included three daughters.

Burke's withdrawal from Columbia University marked a new beginning for his literary career. He moved to Greenwich Village in the 1920s, where he began writing both fiction and criticism. His friendships during this time included such writers as William Carlos Williams, Hart Crane, and E.E. Cummings. With some financial help from his father, Burke was able to make a living from writing reviews, translating, and editing.

Burke's first published work, The White Oxen and Other Stories (1924), consisted of short stories that Burke had been working on during his time in New York. In 1925, Burke's translation of Thomas Mann's Death in Venice was published; it was the first English translation of Mann's German novel. Burke continued to work on his own writing, and in 1931 he published his first book of criticism, Counter-Statement, which was soon followed by his first novel, Towards a Better Life, in 1932. After receiving little financial gain from his novel and short stories, Burke decided to focus on criticism, further developing the ideas about aesthetics and literary form that, as a hesitant participant in the avant-garde movement of the 1920s, he had first broached in Counter-Statement.

Burke then moved to New Jersey, from which he commuted to New York where he worked as an editor, translator, writer, and reviewer. In 1933, Burke divorced his wife and married her sister Elizabeth, with whom he had two sons. Engaging the Marxism that then swirled in literary circles, Burke began to explore meaning and interpretation through symbolic action. He continued writing and began teaching part-time at Bennington College in Vermont.

While teaching at Bennington College, Burke began to work on A Grammar of Motives (1945), outlining what he called "Dramatism," his developing theory of language and literature. Professor William Rueckert of the University of Rochester, as quoted in the New York Times obituary for Kenneth Burke, described "Mr. Burke's most notable achievement [as] the formulation of the systematic body of thought that he called 'dramatism.' The distinguishing characteristics of the dramatistic system are its inclusiveness, its reliance upon language (symbol-using) and its stress upon man's capacity for moral/ethical action, which, according to Burke, is only made possible by language."

Hailed by The Johns Hopkins Guide to Literary Theory and Criticism as "one of the most unorthodox, challenging, and theoretically sophisticated American-born literary critics of the twentieth century," the work of Kenneth Burke continues to fascinate American rhetoricians and philosophers. His prolific body of work, which consists of over 15 books, has influenced notable writers and critics such as Ralph Ellison and Harold Bloom. In 1981, Burke received the National Medal for Literature.

Burke died of heart failure on Friday, November 21, 1993, at his farm in Andover, New Jersey. He was 96-years-old and had enjoyed a long and productive career that continues to influence writers today.